Speaking on the phone is illegal simply because it is dangerous. Having a phone holder where you can freely speak while focused on the road ahead is as much assurance of safety as it is simply being convenient. For those interested in purchasing one, there are a few extra features to look at, with each product offering different sizes and shapes. Other factors also come into play such as personal preferences and different needs. The following are the best car phone mount you can consider buying. 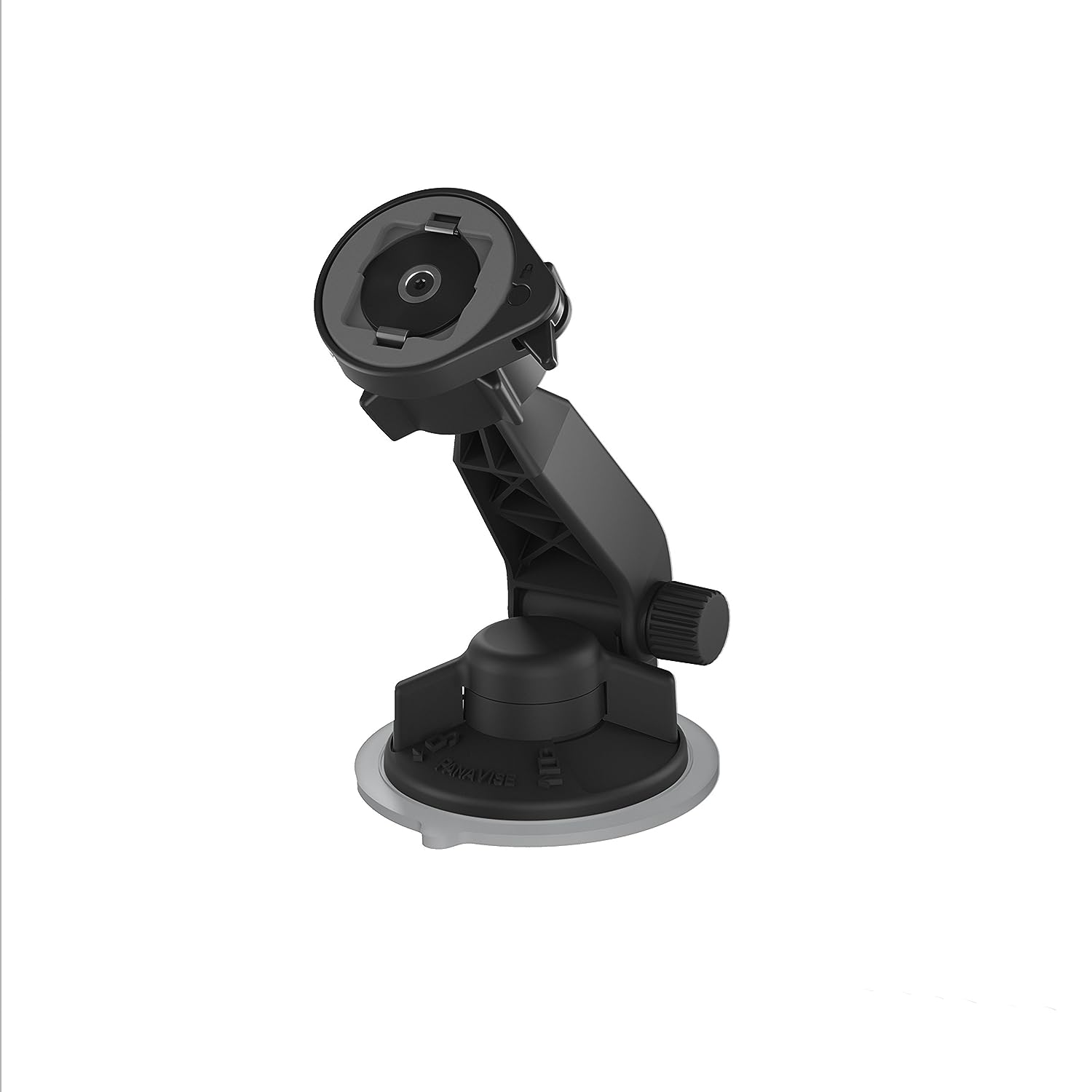 The LifeActiv phone mount is one of the most elegant, flexible, and trustworthy options out there for those looking to firmly secure their phones anywhere on their cars that are at a reachable distance and convenient location. With its easy to mount base, the piece can be mounted anywhere on the dashboard or even glass of the vehicle of any car, allowing a driver quick access to the GPS or maps needed, as well as giving visibility in the event of a video call, all while doing its best to make sure drivers keep looking ahead at all times. The disc design allows not only smartphones of any type, but tablets as well, all of which fit securely in place with one easy click and twist off with just as much ease and security.

For those looking for a quality item that will work for any phone on any car, giving them both the security and the convenience they need, then the LifeActiv phone mount comes in as the number one option. Made from quality material, its durability is sure to last for as long as you need it to, all while offering the safe option of using your phone on the go. 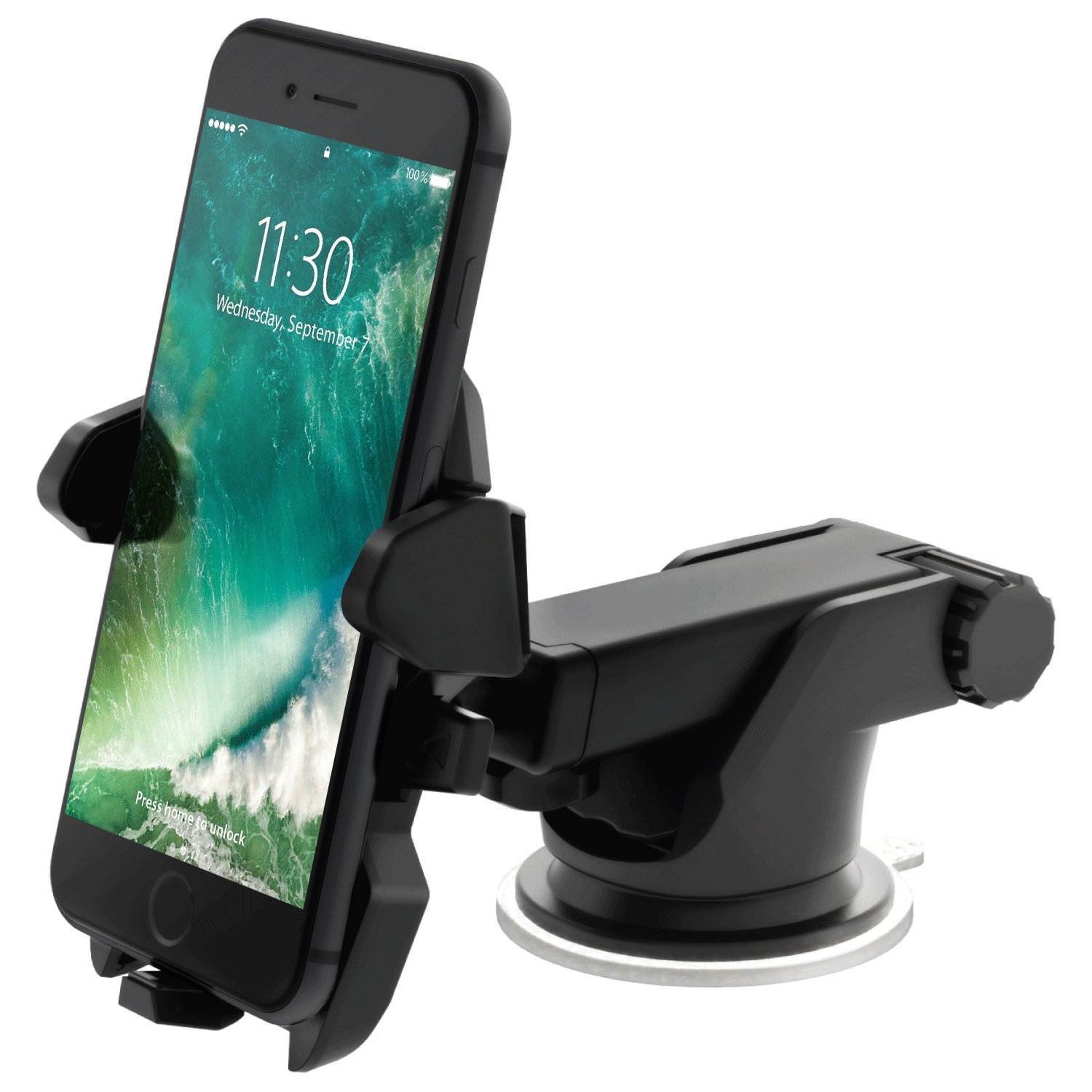 This 7.4oz holder is pretty simple, holding a phone towards users with a “telescopic” arm that extends up to 2” towards wherever it is pointed. The flexible arm also allows one to fix it on any surface as its pivot allows for up and down movement with a 180̊ range. The gel pad at the bottom provides the adhesive power needed to fix on plastic, metal and glass surfaces, making the piece as flexible as it is handy. The holder’s one-touch feature allows you to quickly and conveniently lock or release the phone with a single tap. The holder is compatible with phones with a width of up to 3.2”, which makes it suitable for most smartphones available.

The iOttie Easy One Touch is a great car phone holder with one major problem in the adhesive pad that is uncharacteristically problematic. The rest of the product is of great quality that not only covers all the essential features it needs to but also adds a little sophistication to make it undoubtedly worth the buy. 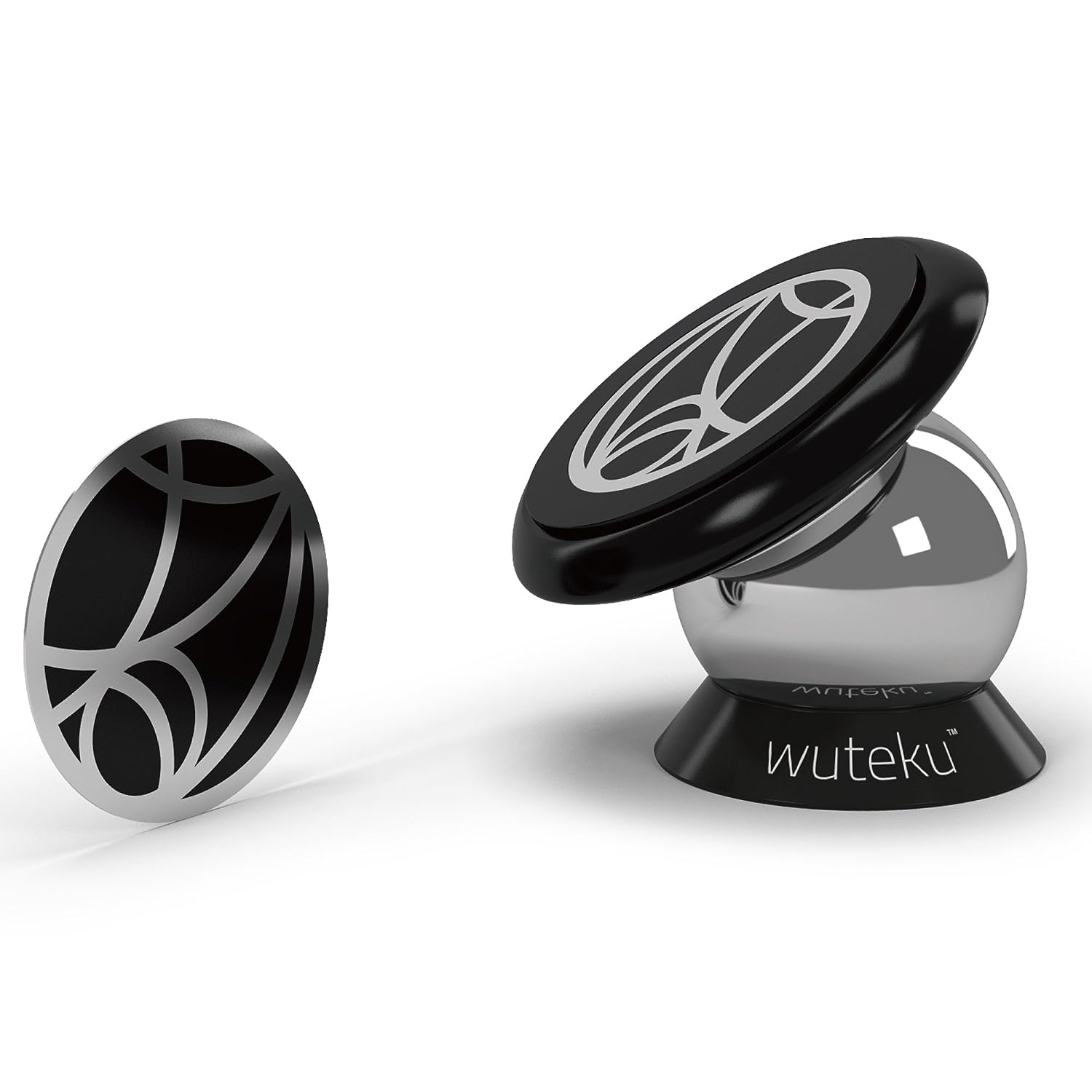 Simply from its appearance, this car cell phone holder looks sophisticated, and upon closer look, it just simply is. Starting off with its magnetic holder, using neodymium magnets, a metallic piece that is attached to the back of the phone means that it is fixed in place without the need for unreliable screws that are susceptible to rattling the phone on rough roads. Part of what makes this holder so sophisticated also has to do with its design, which is both conveniently compact and flexible, allowing you to place the phone anywhere around the dome-shaped structure. The entire piece is adhesive that allows one to stick it anywhere in the car. Finally, due to the fact that it has a magnetic disc, rather than a traditional holder that grips the device, the holder is as compatible for a tablet, GPS, or any other kind of electronic device as much as it is for any smartphone

Despite its adhesive is a problem, an aspect of cell phone holders that is problematic in general, the Wuteku holder is a product that deploys the highest quality pieces to produce the highest quality functionality. Sophistication usually compromises on practicality, but not in this case, making it a rather special product. 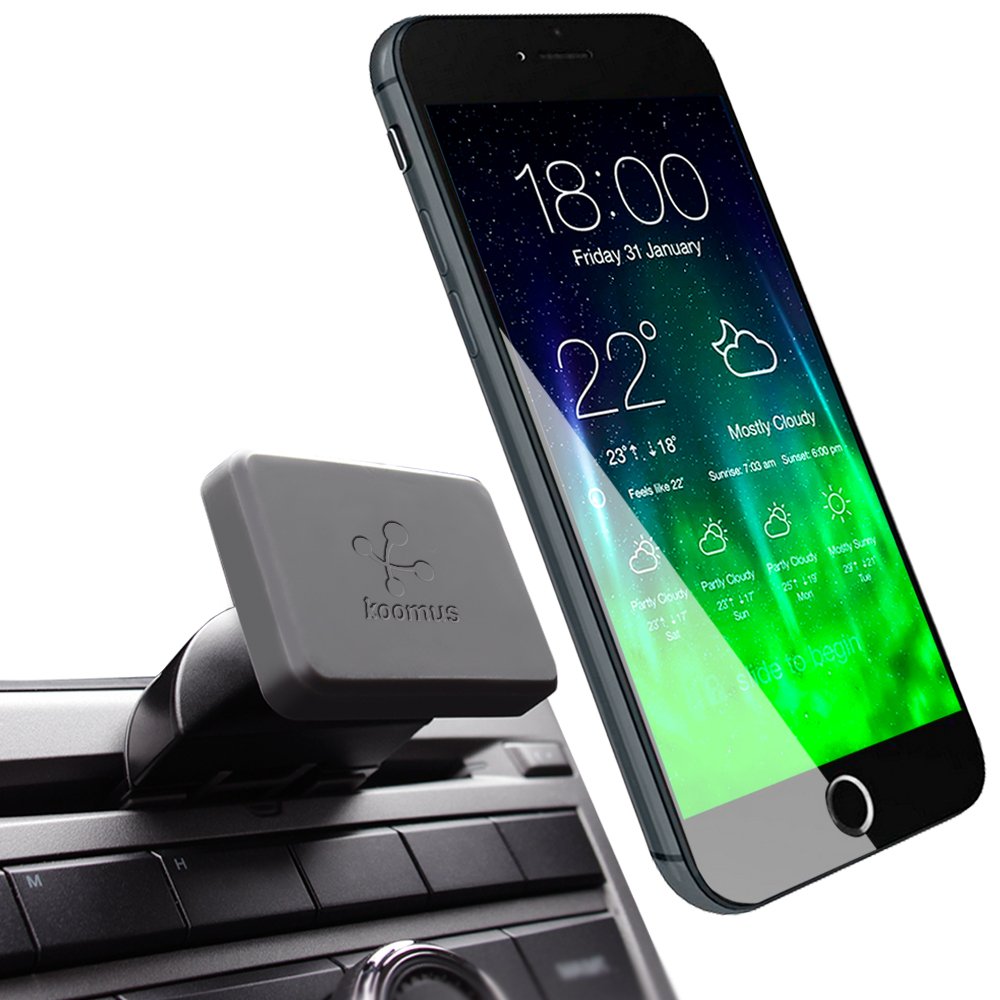 The Koomus cell phone holder is a compact piece that fits neatly into standard car CD slots, air vents, dashboard mounts, and windshield mounts. It uses a magnetic holder to secure any kind of smartphone or electronic appliance a driver needs to quickly access while on the go.

This 2.9 oz. piece is simple but effective. What makes it so special also proves to be a disadvantage to the piece, but if you are looking for nothing more than a holder for your phone, and the places in which a Koomus fits is convenient, then it is a great pick, and given the affordability, definitely worth buying. 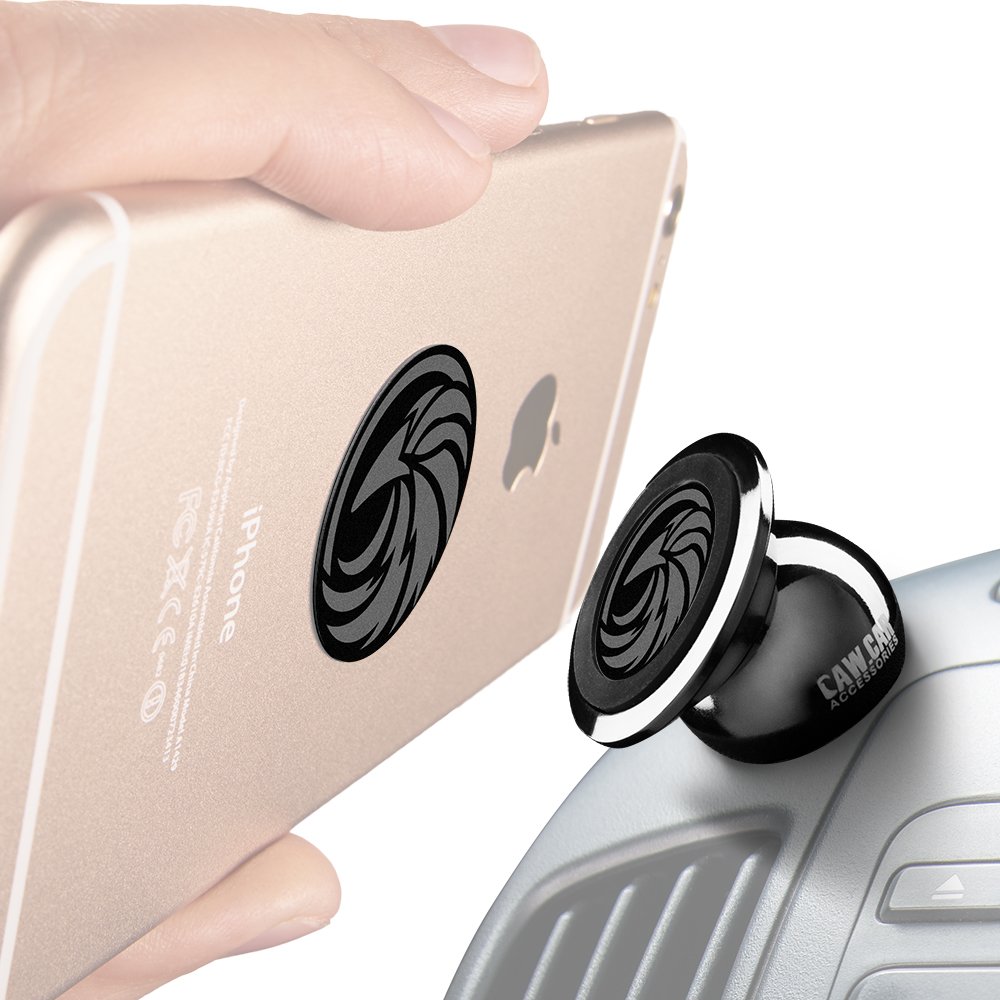 This semi-spherical holder features a neodymium magnetic disc that attracts a matching piece attached to the back of the phone. This does not only free space around the screen of the phone, but it also works as a better holder, preventing the rattling that more traditional grips allow. It also means that it is more suitable for more than just phones as you can attach the corresponding metallic piece onto any device, provided that it is not too heavy.

Working like a charm, offering you the convenience you need, and the safety you want for your phone, Universal’s magnetic car holder is a great buy, easily making it into the list of top 8 holders available. 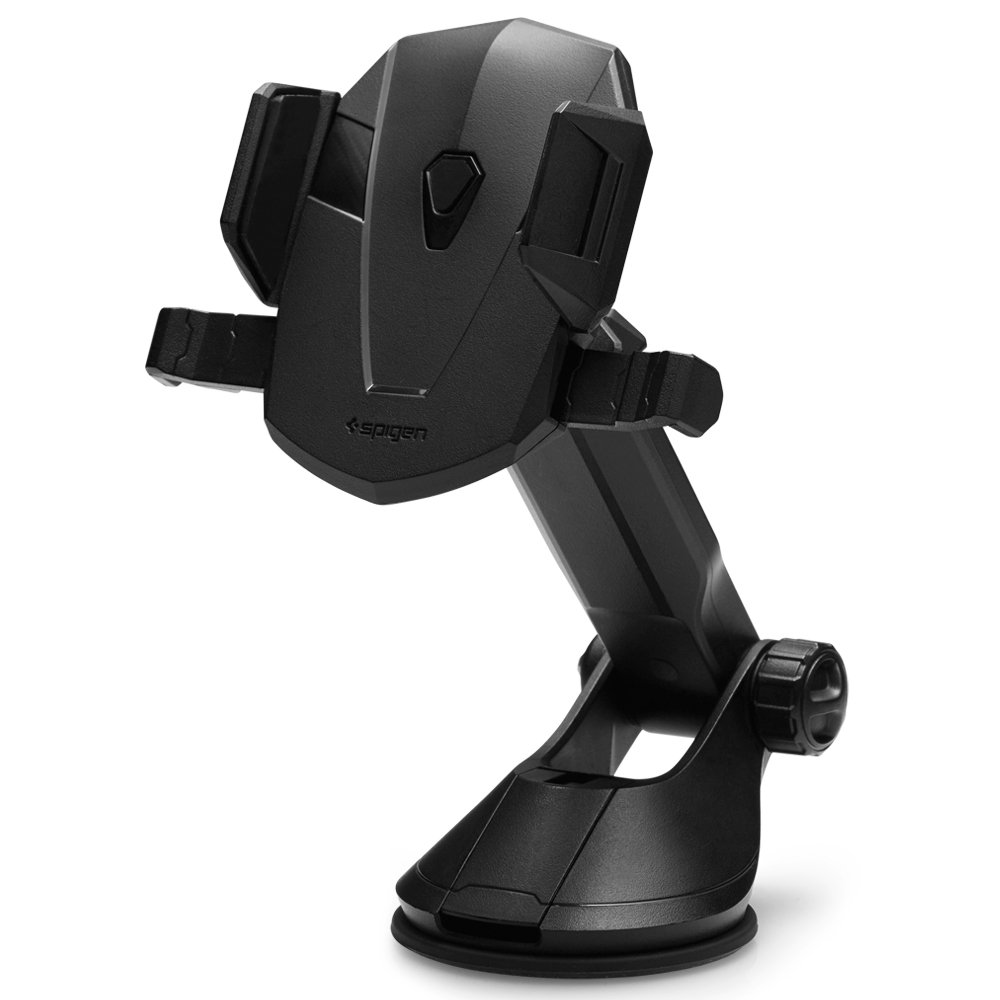 The Kuel phone holder has all the traditional features of a car phone mount, as is apparent by its structure, and works by simply securing a phone with its one-touch feature. Its extendable telescopic arm can go to lengths of up to 9.2” as well as move up and down for convenience. The holder can grasp any phone with a width no greater than 3.5”, making it suitable for most smartphones. It comes with adhesive glue that is unique and more surface-friendly than other types.

The Kuel car mount phone holder is a useful accessory to have in your car, allowing you to easily visualize whatever needed information is on your phone’s screen, as well as quickly and safely tap whatever you need to without taking your eye off the road. The quality piece may look a little bulky, which is a minor and insignificant detail, so it easily makes it into one of the top 8 most recommended holders. 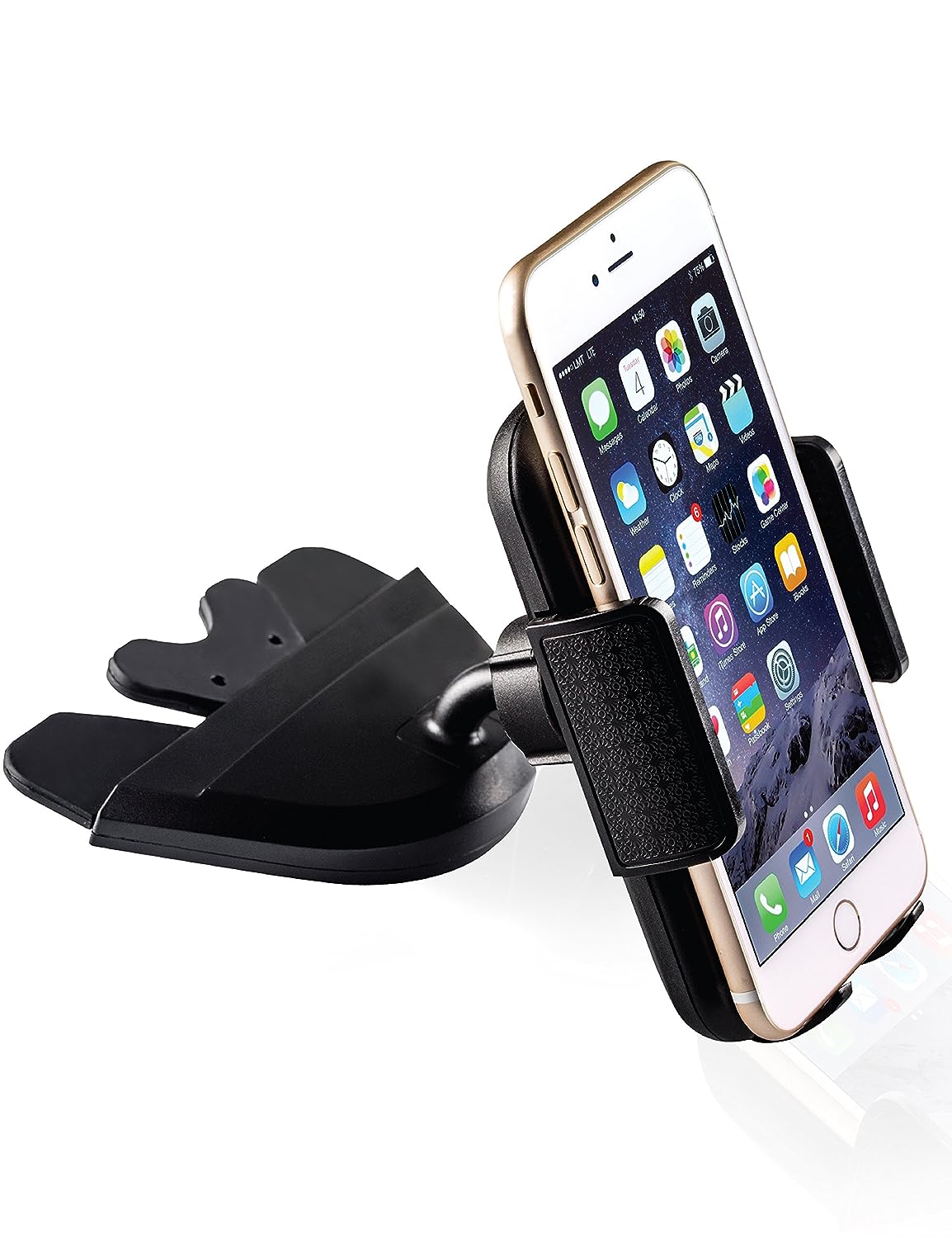 As one of the few phone holders that slots into a car’s CD entrance, something that is undeniably a disadvantage when it comes to flexibility, this product is surprisingly versatile in all of its other features. The holding part of the accessory can grasp anything with a width of up to 3.62 inches, making it just slightly more accommodating than the standard holder; it can hold most phones types, including makes such as iPhones and Samsung’s, but the added decimal points mean that these phones can be fitted with their covers in place. It features the usual one-touch grab and releases technology which ensures the safety of your phone. Its head, which allows 360̊ swivel movement, means that the phone can be strategically placed to face users in a way that is most convenient for them.

Convenience and versatility, paradoxically, seem to be what makes this product both great as well as limited. While its clip base only allows it to be fitted into a CD slot, a feature that is both more secure in terms of staying in place as well as satisfying in terms of avoiding damage. It has a flexible arm that does the rest of its job pretty well. Deducting its one negative from all the positives, the Bestrix phone holders still comes out as a win to any and all who purchase it. 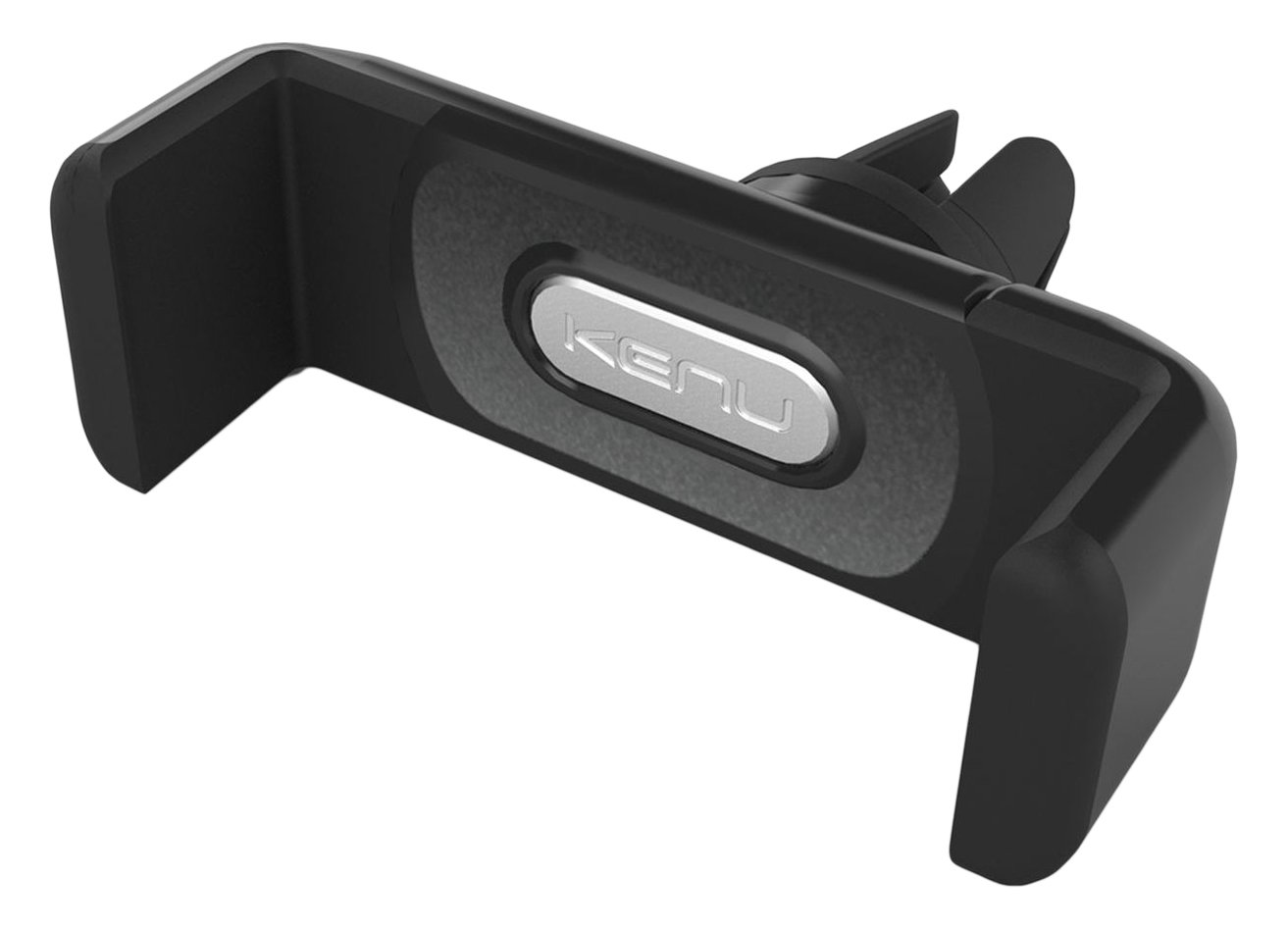 This is a compact phone holder that secures into place on an air vent and firmly holds phones with its 3.4” wide grasp. The piece itself is light, weighing a mere 0.6 oz., the bulk of which constitutes its head. The clips are designed in such a way that they are compatible with any air vent, whether, diagonal, horizontal, or even circular.

If you are looking for sheer simplicity, something that will simply hold your phone at an air vent you know is conveniently placed, then this is the go-to product.

There is a lot that is needed to justify the purchase of an accessory, a category of products that by its sheer name does not seem to be anything urgent, but that is not the case with car phone holders. At a time when using the phone means making calls, locating your destination on maps, and other important functions, these accessories clearly have an urgency to their practicality, making them the popular products that they are.

When it comes to choosing, what is right for you, looking at what they have to offer in terms of flexibility and suitability to your car is important, but given that they work to secure phones, and other devices, looking at their quality is just as important so as to ensure the safety of whatever is being held. After the main features, have been addressed, there are a few extra features, and as in the case of magnetic holders, even the basic elements can be rather sophisticated.

For the affordable prices, they are sold at, the above-listed phone holders cover all of what’s needed, with some doing a little bit more. Whether one is looking for a phone holder for practical, security, or pure experimental purposes, choosing one of the eight is sure to leave the buyer’s satisfied.

The Best Place to Mount Your Smartphone in Your Car